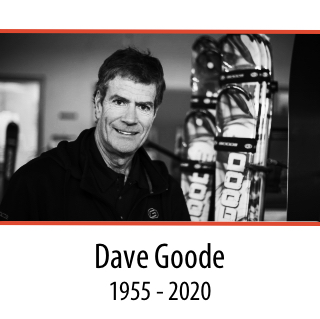 It is with a heavy heart that GOODE Skis announces the passing of its founder and president, Dave Goode.
Dave, 64, died Wednesday while taking part in one of his many passions, piloting his airplane.
Through his numerous technological advancements in both water skiing and snow skiing, and financial support of countless events and athletes in both sports, Dave touched the lives of thousands of people by helping them, and the sports they love, push the limits of performance.
A 2014 USA Water Ski Hall of Fame Award of Distinction recipient and member of the Michigan Water Ski Hall of Fame, Dave was an accomplished international competitor in both sports, recently winning the downhill event at the U.S. Ski & Snowboard Alpine Masters National Speed Series and earning a bronze medal in trick skiing at the Pan American Senior Water Ski Championships.
Dave leaves behind his beloved wife Dawn, parents Paul and Mimi, children Michael Goode, Lisa Goode McHugh (John), Whitney Hebard Felkl (Hans), Gregory Hebard (Adrianna), and granddaughters Maple Julia McHugh and Sunny Elizabeth Hebard.

BWSW shares the very great sadness at the passing of Dave Goode and sends heartfelt condolences to Dawn Goode and family, friends and all at Goode Skis ...