Wakeboarding and water skiing is a sport for everyone and it can have a hugely positive impact on people's lives. Wakeboarding is one of the fastest growing sports in the world - think skateboards or snowboards on water, with participants propelled across the surface and over floating obstacles by a controlled cable tow. Mikey Pinder, who has autism, shares his story of how he became involved and embraced the sport of wakeboarding... 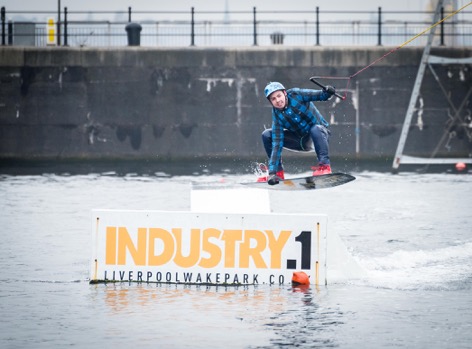 Mikey Pinder, 31, from West Kirby, spent many years trying to overcome difficulties associated with autism. He found it hard to communicate and interact with others. Out of curiosity he tried wakeboarding at the Liverpool Wake Park in October 2013 a few months after it opened by the Queens Dock in the heart of the city, and he has never looked back. Mikey now has social media accounts and is about to become a YouTube sensation. Nearly two and a half years on, the sport has transformed Mikey’s life - he is fitter, stronger and now enjoys an active social life.

“Wakeboarding is a way to clear my head. I really love it. I use my membership like a gym, and also to swim, any day I want, so I feel really healthy,” said Mikey. He added: “One year after my first session I made my debut at the Grassroots Tour competition. I was nervous but it was a great experience. I came in ninth place and everyone cheered me.”

Mikey’s progress delighted the staff at Liverpool Wake Park; the team offers support and training to users of all ages and abilities, and Mikey has quickly become a star down at the dock.

Owner of the wake park, Tim Woodhead, said: “The sport is set up to be accessible to all, and the high walls and calm water at the dock allow boarders to pick up skills quickly. But it was fantastic seeing Mikey make so much progress in other areas.” He added: “Mikey has gained so much belief in his own abilities, and he is now quite the showman. We all thought that making a film would take Mikey to the next level. That process has been a superb learning curve for everyone at the centre.”

The three-minute film was shot on location at Queens Dock. It’s showcases Mikey’s inspirational journey and highlights how the confidence he has gained from the sport now overspills into his everyday life. Wakeboarding has opened many new social circles, as Mikey explains: “I meet loads of new people now. We talk about what we have done, what tricks we have practiced, and I have lots of wakeboarder friends on Twitter, and especially Facebook.”

“People should give it a go. Anyone can do it. You don’t have to be a pro.” Mikey’s message to anyone considering trying the sport is simple: “Do it for fun; feel happy!”

This video was produded by Whitenosugar Productions in conjunction with British Water Ski & Wakeboard and Liverpool Wake Park.