Freddie Winter and Will Asher were second and third respectively at the first Pro competition of 2021 and the first in the inaugural Waterski Pro Tour on Sunday 2nd May. . . 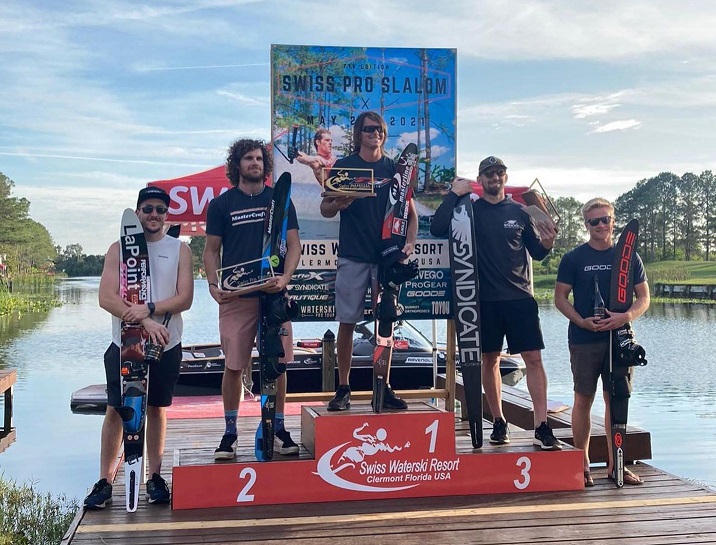 Freddie, who won the Swiss Pro Slalom in 2015 and 2020, lost his crown to the world record holder, Nate Smith, but only after a dramatic four-way run-off in the final.

“It’s nice to get second, that’s always good. Happy enough, a bit frustrated with myself, if not the result.”

Will was satisfied with his performance.

“I’m happy. You’ve got to be in to win it. I got into the run-off final and that’s best we can ask for. A lot of skiing today. I’d be lying if I said I wasn’t tired.
“It’s been a fun day. Everyone’s skied out of their skin. Happy to come away with a podium. That’s sweet.”

Rob Hazelwood skied brilliantly in his first-ever US Pro event, scoring 3 @ 10.25m in both preliminary rounds to make it into the eight-man final. Had he managed the same again he, too, would have had a shot at the podium. He scored 1 @ 10.25m, finishing in 8th spot.

There was good representation from British skiers, with five competing in a strong field of 23 men. Joel Poland, fresh from setting a pending overall world record last week (we’re keeping everything crossed that it is ratified), finished 11th (1 @ 10.25m). Arron Davies was 17th (4.5 @ 10.75m).
The Swiss Pro Slalom was the first competition in the inaugural Waterski Pro Tour – a series of competitions in the USA and Europe at which points will be awarded and an overall champion crowned at the end of the season.

The event was webcast live by The Waterski Broadcasting Company. It’s still available on YouTube and is well worth a watch if you missed it.
YouTube Link