Victory in Greece for Will Asher

Will Asher was victorious at the Kaiafas Battle Pro Am slalom held in southern Greece on 9th and 10th July 2022.  It’s his first major win for some time after a series of 2nd and 3rd places.  Fellow Brit Freddie Winter finished just behind him for a GB 1-2. And there was another podium for Joel Poland in France.

Will is a regular on the podium at pro events but it’s been a while since he made it onto the top step. At Hatzis Waterski Paradise in Kaiafas on Sunday he broke his drought in style, equalling the course record in the first round with 4 @ 10.25m. In the final, he was only half a buoy off repeating the feat, doing just enough to secure the win. 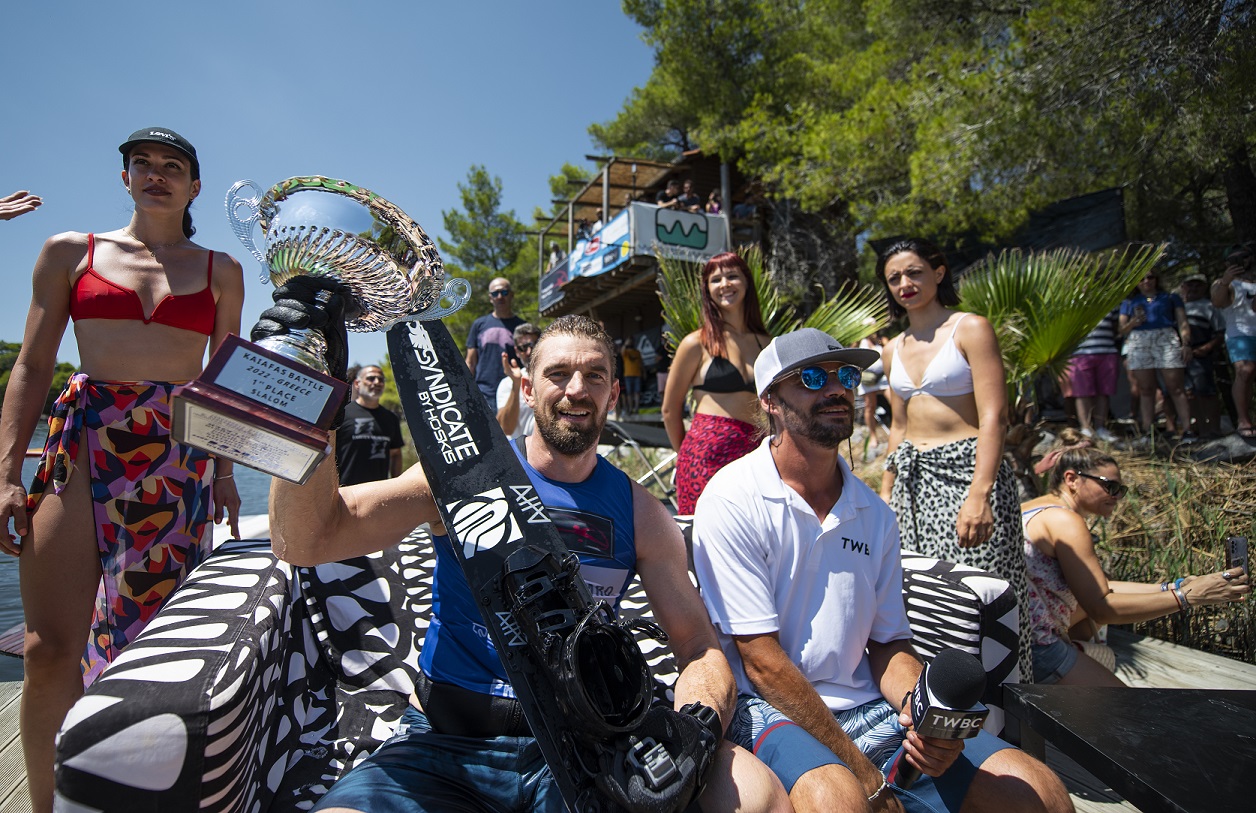 “I feel amazing. We have had the best week of our life in Kaiafas,” Will said as he emerged from the water to be surrounded by a large crowd enjoying the amazing Greek party atmosphere. The skiers said it was unlike anything they had ever seen at a water ski competition. There was a DJ, live music and dancers on the dock throughout the finals and huge trophies up for grabs in addition to the prize money. 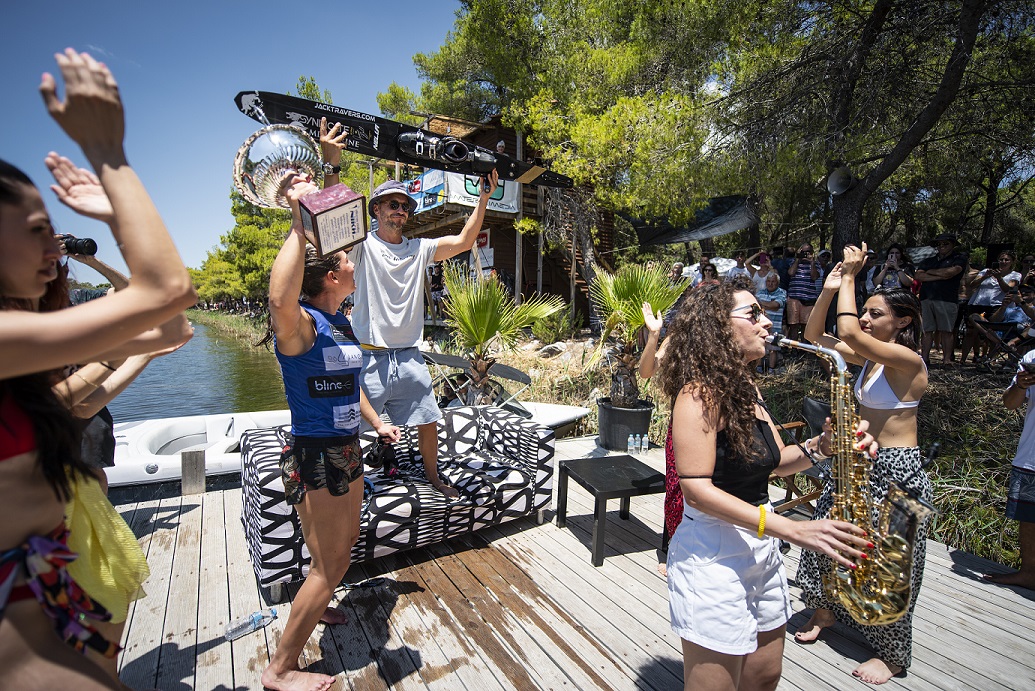 Freddie Winter returned to action after missing two competitions with a back injury and managed to finish just behind Will with 3 @ 10.25m. Third place went to the Italian, Matteo Luzzeri, who made it onto a pro podium for the first time in eight years. 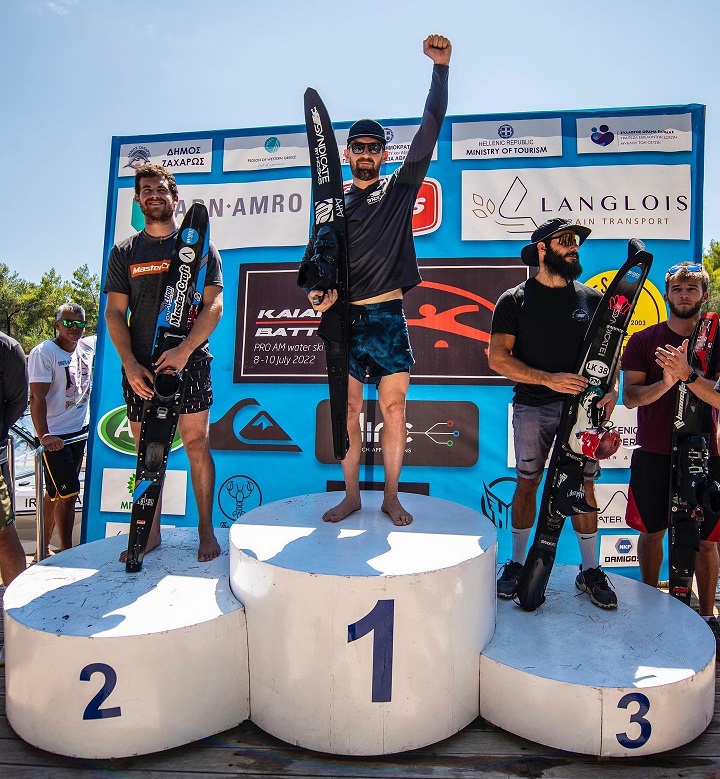 The only other Briton among the 10 starters in the men’s slalom, Arron Davies, had his best professional competition yet. He twice ran 10.75m and equalled his personal best of 3 @ 10.25m in the third of three preliminary rounds. Had he been able to do so again in the final, he would have beaten Freddie. In the end, Arron was sixth with 3.5 @ 10.75m. His skiing throughout the competition earned him the Skier of the Day trophy, voted for by The Waterski Broadcasting Company webcast audience. 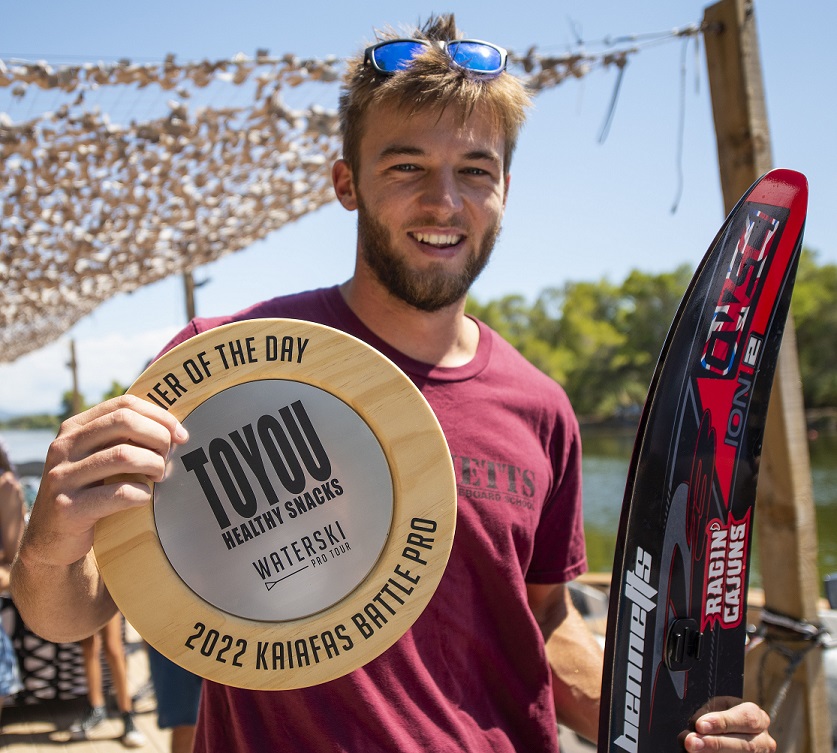 Congratulations also go to Nathan McGarry who was selected to drive. It was only his second pro competition drive and came a week after his debut at San Gervasio in Italy.

The results at Kaiafas mean Will extends his lead in the Waterski Pro Tour standings. The tour is a series of professional competitions held throughout the season in the US and Europe with points awarded and a tour champion crowned at the end.
The Kaiafas Battle was the third of five WPT competitions being held in Europe over consecutive weekends. The tour moves on to Norway next and the following weekend it heads to the UK for a slalom competition with a difference. The world’s best will battle it out, skiing side by side through parallel slalom courses behind two boats. “The Duel” will take place at Cirencester Water Ski Club at South Cerney in Gloucestershire on 23rd and 24th July.

The Kaiafas Battle took place on the same weekend as the first stop of the Overall World Tour, organised by World Water Skiers at Lacanau in France, where Joel Poland picked up the latest in a long line of podiums. The Overall World Champion and world record holder had to settle for second place this time, behind Louis Duplan-Fribourg of France. Martin Kolman of the Czech Republic was third.